TechEconomy’s investigations show that the industry has been thrown into confusion as an invitation for a public hearing, jointly signed by the Clerks of the Senate Committee on ICT and Cyber Security; and House Committee on ICT, Mr. Ayo Ogon and Abosi Lolo, respectively, and published in a Daily Trust Newspaper (today) Thursday, December 22, 2022, fixed the hearing on Friday, December 23, 2022. 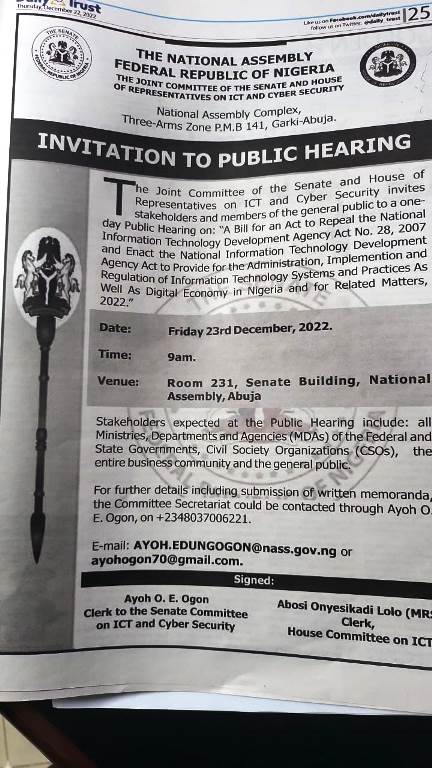 This is coming a-day after both Chambers of the National Assembly had proceeded on recess, indicating desperation by the Committee to pass the controversial bill which could cause a disruption of the entire ICT sector in Nigeria.

While it was suspected that the Committee wanted to pass the bill without substantial public participation it was also alleged that the submissions of the industry stakeholders made during its first public hearing, were jettisoned, and that the current invitation may be the ultimate smokescreen to pass the controversial bill.

There were also allegations that the Committee did not formally invite key stakeholders for fears that the process to force down the bill in the industry may be scuttled, hence the Joint Committee capitalized on a hasty public notice, issued within hours to the public hearing.

When contacted on phone, Mr. Gbolahan Awonuga, the Head of Operations at the Association of Licensed Telecommunications Companies (ALTON), said although the Association was invited to attend the public hearing, but the invitation was too short as most of the officers have either traveled or concluded plans to travel for the holiday.

“Meanwhile, we have stated our position on this Bill; NITDA is a ‘Development Agency’ while NCC is our (telecom industry) ‘Regulator’. An attempt to create another agency will destroy this industry. Looking at this NITDA Bill, it seems the NASS has an intention to make NITDA the NCC’s regulator! This is an absurd and should be discontinued. And the process, especially the timing of the public hearing is very unconvincing”, he lamented.

There was another allegation that the joint committee in the undue haste to pass the flawed bill, had had thrown away all the submissions made by the members of the public and stakeholders during the first hearing where the bill was vehemently opposed.

Among the stance of the stakeholders, was that rather than preserve and promote the mandate of NITDA as a statutory ICT development agency, they have made up their mind to create an agency with similar responsibilities like those of some of existing regulatory agencies in Nigeria.

“All well-meaning Nigerians and all stakeholders in the ICT industry should know that if the enemies of Nigeria, who are determined to force the new bill down our throat succeed, the gains recorded in the ICT and telecommunications sector in the last 22 years will be reversed”, another industry stakeholder who pleaded for anonymity, said.

Just in the second quarter of 2022, the ICT sector, besides digital services, contributed 18.44 per cent to GDP.

This is unprecedented but painfully it is one of the gains the passage of the infamous bill will reverse.

For the First Time, SpaceX’s Starlink is Operational in Nigeria