Elon Musk Confirms he will Resign as Twitter’s CEO

Elon Musk will step down as the Twitter CEO, the world’s richest man has just announced. Musk said he would quit after finding a replacement.

According to a Bloomberg source with knowledge of the situation, he is actively looking for a potential replacement

“I will resign as CEO as soon as I find someone foolish enough to take the job! After that, I will just run the software & servers teams,” Musk tweeted.

He also promised that he would “abide by the results” of the poll. The result of the poll showed that 57.5% of respondents were in favor of Musk’s stepping down. 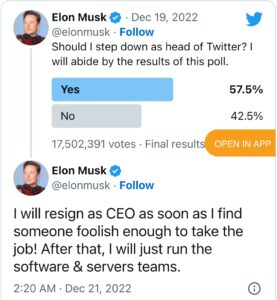 One of the most significant social media organizations in the world has undergone broad, occasionally chaotic changes as a result of Musk’s brief time serving as CEO.

Under his direction, Twitter has fired the majority of its employees, alienated significant advertisers, welcomed former President Donald Trump back to the service after his suspension following the Capitol riots on January 6, and made internal communications about Twitter’s operations available to journalists prior to Musk’s acquisition of the company.

NITDA Boss at KWASU Calls for Improved Collaboration among IT Stakeholders